A giant flagstaff has been proposed in the site of the Bel Retiro bungalow.

GEORGE TOWN: Does Penang Hill need a helipad, a four-storey food court and a mammoth flagstaff?

All three are part of a proposed development blueprint slated to be approved next year and environmental watchdog Penang Hills Watch (PHW) is concerned. PHW has spotted the plans after looking through the draft 2020 Penang Hill Special Area Plan (SAP) for the hilltop resort.

The SAP governs what can and cannot be built on the hill and has been in effect since 2016. However, the SAP is renewable every five years and the proposed changes are being made public for the 2020 update.

“A huge flagstaff on the ridge of the hill. A helipad which is seemingly supported by two beams. A four-storey Astaka (food court) building. Is this what we want for Penang Hill?,” it asked in a Facebook post yesterday.

Penang Hill once had a large flagstaff erected next to the colonial governor’s house, the Bel Retiro, in 1789. It was also known as Flagstaff Hill, which is currently reflected in its Bahasa name, Bukit Bendera. According to the proposed plans, the large flagstaff would be constructed in the bungalow’s compounds. 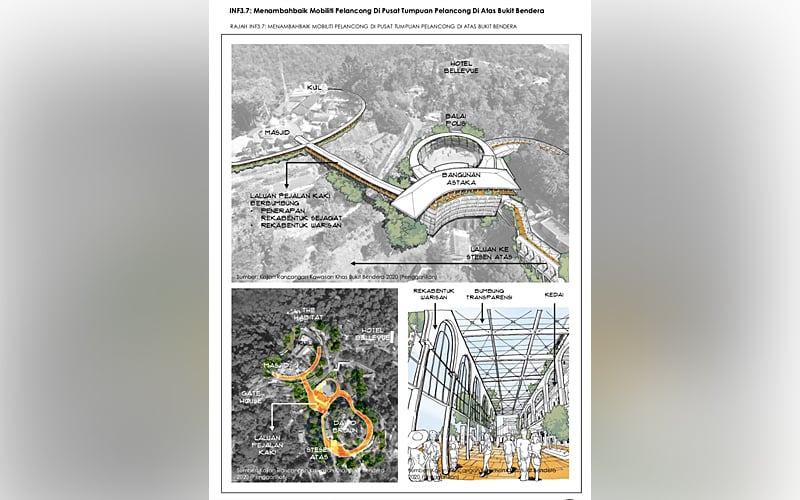 PHW’s co-founder Rexy Prakash Chacko urged all Penangites to look through the draft SAP now available online and to submit their feedback to the state Town and Country Planning Department (PLANMalaysia) via their online channels by the month’s end.

“People should use this opportunity to review and comment on the draft SAP,” he told FMT.

Other proposed additions to the 2020 SAP includes a crescent-shaped covered walkway which will circle the present Astaka, extending out upwards to the mosque and temple on higher ground.

The Astaka will be upgraded from its present state, which has two floors of eateries and a roof top, to a four-floor, glass panelled building, with panoramic views of the hill below.

It would also feature a walkway with a transparent roofing. A helipad will also be built for emergency use.

The draft SAP, set to be approved next year, will also see iconic bungalows being repurposed as lodges. In the state assembly last November, the state government had said four such bungalows would be converted into 200 to 300-room hotels.

The SAP has come under scrutiny by NGOs, primarily due to concerns over the hill’s holding capacity. Critics say any further development would be too much for the resort to bear. The current carrying capacity mandated by the SAP is set at a maximum of 4,800 people a day.

Their objections were mounted after the Penang government proposed a cable car line from the Botanic Gardens at the foot of the hill, to complement the Swiss-made funicular railway, which was running above capacity.

The cable car project has been included in the 2020 SAP.

The Penang government, however, claims the carrying capacity has yet to be met, recording at least “1,500 people at any one time, at most”, in a state assembly reply last year.

The NGOs, led by the Consumers’ Association of Penang and Sahabat Alam Malaysia, estimate that at least an average of 5,000 people were on the resort a day, based on an average of two million people going up there in a year.

The state government has clarified that 1.38 million people went up the hill as of Oct 17 last year. FMT has reached out to Penang officials for a response.

Flagstaff Historical past: Mill on the town for making pencils mulled – Arizona Each day Solar