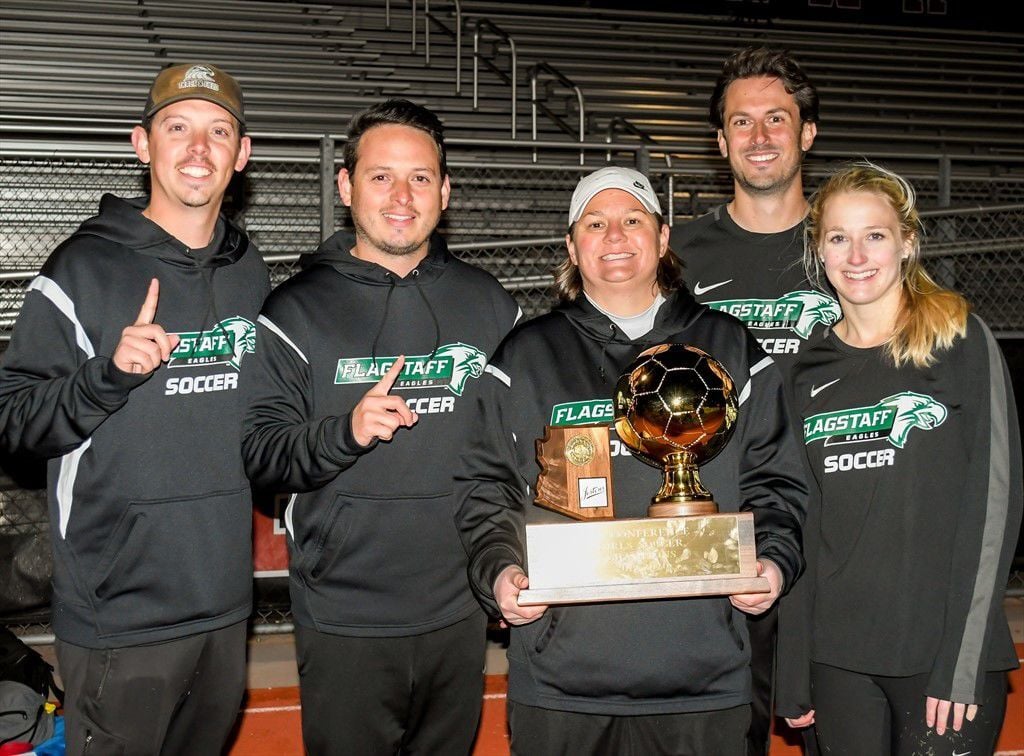 Holly Jones, center, stands with her coaching staff after the Flagstaff Eagles girls soccer team won the 2019-20 4A Conference state title in Gilbert.

Months after her young Eagles team survived post-regulation matches to win the 4A Conference state title, Flagstaff girls soccer head coach Holly Jones can add another plaque to her collection.

Although she was snubbed for the 4A coach of the year award — that honor going to Prescott head coach Paul Campuzano — Jones was named the Arizona small school girls soccer coach of the year by the United Soccer Coaches Association for the winter season.

It is Jones’ first award from the United Soccer Coaches Foundation, and it comes following a roller coaster of a season in 2019-20.

Jones and her coaching staff helped lead a young group of Eagles to some unexpected heights. The Eagles won all four of their state tournament matches post-regulation — and the final three by penalty kicks behind dominant play in the net by Eagles goalkeeper Lianna Albert, the Arizona Daily Sun girls soccer athlete of the year.


Lianna Albert shines in the biggest moments of FHS girls soccer’s 4A title run, earns athlete of the year honor

The insane title run, Jones said Wednesday afternoon, probably played into her getting the recognition — although, as she often does, she passed much of the praise to her team and assistant coaches.

“For me it’s more about honoring the players,” Jones said, adding the award is about as much about her players as is it about her coaching staff as well. “I think any time a coach gets an award it really goes back to how the players react to expectations and the season. I think everything that comes around goes back to players.”